bark and fester LLC, BKNFR, is an independent game studio
based in New York,
founded August, 2015,
and found at: http://bknfr.com/

BKNFR is developing its debut twitch-puzzler, roTopo, set to release July, 2016 on all web platforms.

Bark and Fester LLC, being of both dispositions – pen & paper Bark and crayon Fester -, create a visual design for ROTOPO, their debut video game.

Before BKNFR was a thing made up in an afternoon, Fester spent time alone, “when, back then, it was a blur of making lots of Hammer levels…, none were so great.” In a twitch stream before this too, now lost to space, someone says of designing worlds, “No one ever notices when everything is right; it’s only when something is wrong [that we’re left wanting],” and reaffirms Fester that wanting anything at all is an emotion that he captures profoundly in his own worlds.

The first he hears that this is a problem is when Bark returns from a family adventure and uncle stuff with new babies. Older folks during said, “[ROTOPO] is fun, but something feels missing [, and we feel wanting because of it.]” Bark, correctly, called it a lack of visual interest (and there was some more to do with motivation in being evaluated and having a sense of place in the world too).

Fester was confused by the criticism, thinking it enough that here too, like in other designed things, there was always wonder at the world beyond a blocked-off edge, things of substance cut-off just out-of-sight where no amount of neck-craning could avoid having to use imagination. Fester thought it made these places compelling. Fester says, “I think, actually, well, that maybe it was a baby excuse in my head to continue being okay with being lazy.”

There’s the more general belief now, that BKNFR subscribes to, that parts of the universe and, too, parts of games are constantly wrong and then unraveled. BKNFR considers that, if everything were right with video games, there’d only be satiation with Tetris or the fuzz of oscilloscopes in a small industry for physicists. They also consider that, if everything were right in the universe, the two sides of North America would have never curled up to bump Bark against Fester.

More to the point, says Fester, “To the point, more,” there are always words that seem off, cars that are tuned poorly, missed beats in a performance, poorly placed mountains. It’s barely ever obvious the core of these feelings, lacking enough vocabulary (especially for a new developer). They’re always noticeable and they always stand out and they always “add character or something like it,” says Bark.

But what makes these “off things” compelling at all is not a want for more (or in being attentive) like Fester had assumed, but for repair until pristine, is something just realized at BKNFR. Bark and Fester are now trying their best to make everything seem right in ROTOPO and don’t yet rightly know how.

And did in fact carry very little visual interest like Bark’s older folks suggested. It was mostly deliberate, that difficulty was so high for ROTOPO’s brand of puzzle-action, that to avoid distracting the player from the visual cues they most needed to succeed (the puzzle’s shape, the player character’s location, and character hazards) BKNFR hedged on simple visuals.

That decision was the end result of near-constant clashing between Bark’s pragmatism in development and Fester’s anxiety to appeal to things visually nice. It was that Bark had done all of this design-into-product translation before at a real job some time ago and that Fester had leftover feelings on spending an hour on a half-second set-piece in one of his worlds.

It was then that, being really business-sense-like, they chose the default approach of the more enthusiastic party because both approaches are too difficult to manage at once. Chosen was Bark’s gameplay-first focus, something singularly useful in game development. Fester knows it now, notes that, “It’s because games need to play well to be good and only need to look good never.”

Something about the two: Bark wears only sweatpants. He is very used to maths and logic and is a profoundly great programmer who is fine with the stereotype. He subscribes to an objective truth that games deserve, above all else, mechanical perfection. Fester therefore needs to be, for a good team-up, very terrible at these things and only wears sweatpants at home, when fall and chilly, and is very used to judging appearances above most all else because “god doesn’t let the colorblind and poorly-dressed into heaven.”

Still, there were plenty of visuals to be designed in response to criticism of “something missing” and Bark dictated the order and the steps in between with pragmatism always in mind. The goal was this: To preserve ROTOPO’s simple appearance, there for the sake of ease of use, while indulging parts of Fester to deliver a pleasing and interesting visual experience.

An aside as an example: An early decision was made on scanlines. Fester imagined they’d give the world some texture and, good for Bark, it also solved a technical problem with transparency.

Bark explains that, as pixel density on modern displays increases, the feasibility of selectively discarding pixels to produce the effect of transparency increases (imagine little photons randomly bombarding a translucent piece of glass. Some make it through; some don’t). Simply drop every third pixel and you’ve got 66% opacity. Drop them in lines or patches to give a material not just some added pizzazz, but variability in its transparency that can provide visual cues in a game where shapes are layered.

One awesome result of this approach is that discarding pixels avoids many of the issues graphics developers run into with blending and depth buffers. That is, rather than trying to blend some faded pixel with everything underneath it (a process which involves knowing the correct order of everything on the screen at that pixel location), it can just be rendered normally at full opacity while its neighbors aren’t.

One big change first: Before unloading on visuals, Bark would make the best rotating, panning player-tracking camera that would ever exist. It was in the convex corners of more difficult puzzles where the camera would often fail to keep with the player’s own want of sight (craning your neck past the horizon does nothing, probably doesn’t inspire wonder, BKNFR apologizes) in balance with slower camera movement to avoid a whiplashing. Clearing this up would prove extremely difficult and extremely useful.

And one tiny change to start: The matted salmon puzzles would get a slight gradient to move further from flatness, which Fester notes is a synonym for blandness. See the changes here:

And a larger change – again about flatness: The negative space surrounding puzzles would be painted with some slight detail. One character would get his star field, another, an ocean. And all would suddenly have some background context without detail being injected into the focal points of play. Unfortunately, then, the slightest camera movement would whip decals dizzyingly back and forth. Any color and detail differences between them and the background were brought close to zero in response. All of it, just a minor change, they say.

In heat on Bronkaid one night and obsessing, Fester pulls up pictures of ocean vents and flat yellow fish and a rock. He sets up a scene for Duncan Plunder, ROTOPO’s very own deep-sea diver. 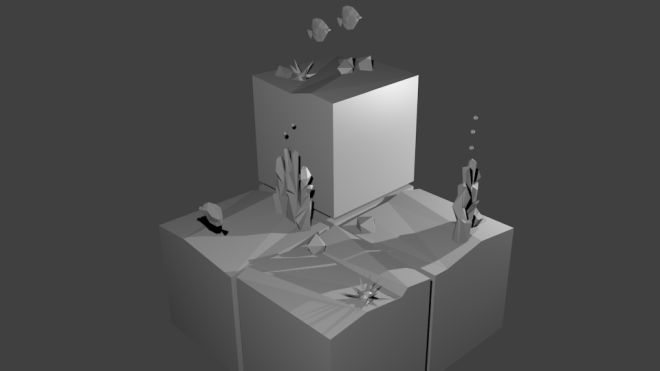 The scenery is broken into two parts: There is the tile displacement – a bottom of the ocean – made slightly angular to add depth to otherwise flat tiles; There is the detail – a coral bunch, some rocks, those fish – also made angular to jibe well with the displacement. “… all done low-poly in the interest of saving time and maintaining the same low, low level of effort in art…,” Fester adds, then, “it’s easiest and there are multiple characters and too much detail would get washed away from a distance anyway.”

There was the thought that low-poly would seem a cop-out. That right next to sprite work, that low-poly 3D is overused and everyone hates it, that it’s a something not worth paying attention to for lack of creativity or inspiration. “It [being a cop-out] is totally not considered in reality, under deadlines and infinite crunch,” Fester says, just two steps about moving away from programmer art, “Now quoting me…?”

Fester gets up. He calls in Bark who left for a call before but was just idled in the hallway instead, thinking. Bark comes in, says to hurry things up, “that I tried the scenery out as just caps, didn’t work – it looked insane,” rushed and then, “then decided that maybe if we let it all loose and scattered across the whole of it…” then to which Fester says, “and maybe too overbearing, distracting visuals, there could be displacement-only tiles as well as ones with all the scenery we can manage…” and Bark then says, “then we came up with: 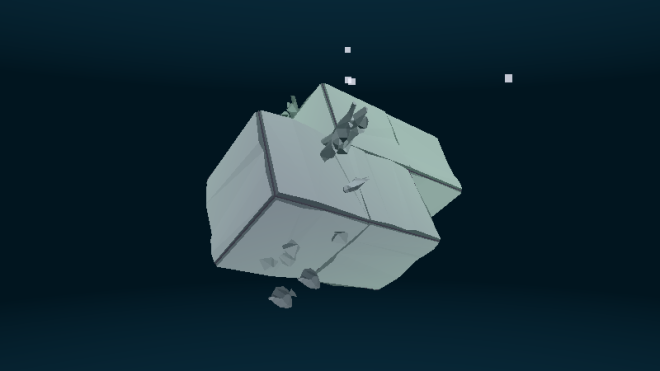 which worked out just fine. That’s it. No more of this.”

There was a note Fester wanted to cover about iterating in development. He says he does not believe that players make concessions because they imagine design considerations. He says that no matter how clear the goal of a design – like here to introduce more variety in visuals -, its implementation is always more important. That that implementation is up to redesigning, is often a case of again and again pinpointing and subduing a thing from feeling missing. That it’s hardly a science. That it’s a tired and drawn-out course followed until everything seems right. For long stretches, all of it feels incomplete and rushed and unfinishable.

Fester says, “It’s going to be like this until the whole of it is done.”